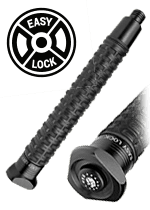 This type of baton can be opened by swinging the handle into a free space or by pulling out the tubes by the baton's tip. The locking mechanism then locks the tubes into the expanded position.

The best feature of this baton is the push button closing method. The lock is released when you press the button at the end of the handle and push the baton tip inward. The tubes can then easily be pushed back inside the handle.

The baton can always be closed easily and effortlessly, no matter the force with which the baton opened. There's also no need to look for any hard surface to close the baton as you would with a friction lock expandable baton.

The baton can be closed only with the button located at the end of the handle. It is not possible to close it by hitting it on a hard surface as that may cause damage to the baton mechanism.

During drop tests the baton was dropped from a 2-meter height onto concrete (the German standard requires only wood, which is a much softer surface). It was then possible to close the baton as smoothly as before.

The baton has been tested by opening and closing 6 000 times, and the mechanism continues to perform flawlessly. The locking mechanism was tested repeatedly by submerging the baton into mud and then operating normally.

In this case we deliver the baton with a swiveling holder of the type BHT-55. This plastic holder makes the automatic extension of the telescopic tubes possible when pulling out the baton. The tip of the baton remains caught in the holder and the baton starts to automatically extend. The baton will already be fully extended when taken out of its holder, which will save time in a critical situation

If you don’t find this method of extending the baton useful, you can remove the holding base from the bottom of the holder. You can simply unscrew the two screws on the back of the holder and remove the base. The baton will now remain closed when taken out of the holder.

Thanks to the UBC-05-A belt clip, the holder can be smoothly rotated in the range of 360 degrees without the use of any tool (there are 16 possible fixed positions). And this clip comes with much more features…

The holder is equipped with universal belt clip of the type UBC-05-A, which enables the user to quickly change between different plastic and nylon ESP holders with rotation mechanism. The clip itself remains fastened to the belt – you only need to click on the holder of choice.

Thanks to this highly flexible system, the user is able to change his or her equipment according to the particular needs at a given moment. A magazine holder can be switched for a flashlight holder or for a baton holder. In case of need – for example when the police officer is busy with administrative work – the holders that are currently not necessary can be put away completely.

The belt is pulled through the opening in the body of the clip. The holder is then slid onto the clip and secured with locking mechanism.The clip can be adjusted to the belt width from 38 to 68 mm by an adjustable stop with two screws.

Due to the button located in the baton ending, it is not possible to add any accessories to the baton handle. Only detection mirrors BMO-02 and BMO-03 can be fitted onto the baton, other ESP accessories are not compatible.