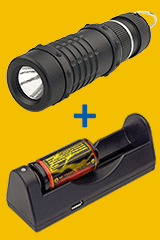 innovative Cree LED chip ● 5W performance ● luminosity of up to 350 lm ● waterproof duralumin body ● can withstand rough handling ● front glass is made of polycarbonate ● can be used as a pocket flashlight (without the baton) ● thanks to the metal ring can be attached to your gear or to your keyring ● enables 4 modes of lighting:

The ESP expandable baton can be equipped with this tactical flashlight which greatly broadens the possibilities of the baton’s use. The innovative Cree LED chip with 5W performance ensures the luminosity of up to 350 lm. The flashlight is waterproof (it can be submerged in shallow water) and it can withstand rough handling.

The flashlight comprises an electronic module, which enables 4 modes of lighting:

You can switch between modes by quickly turning the body of the flashlight the same way as when switching the flashlight on. After a longer break (more than approx. 2 seconds) the flashlight returns to the mode of full output.

The flashlight is powered by the 18350 type battery which can be charged in the adapter with micro USB connector. The adapter can be connected to a charger from a regular smartphone with the micro USB connector (this charger is not part of the package) or – using the cable supplied with the flashlight – the battery in the adapter can be charged from a PC or a laptop.

The flashlight can also be powered by the non-rechargeable battery CR 123A in combination with the plastic insert which compensates for the smaller diameter of the battery. This can be very useful as a back-up power source.

The flashlight is made from highly resistant duralumin. The front glass is made of polycarbonate. The flashlight length is 112 mm, the head diameter is 30 mm, the weight is 152 g (incl. battery). The flashlight attached to the baton lengthens its handle by 72 mm.