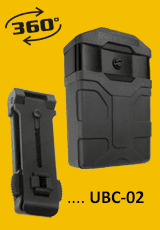 equipped with fixation clip UBC-02 ● the holder can be rotated in respect to the belt by full circle of 360 degrees ● self-locking design with the fixation spring ● designated for carrying of absolute majority of magazines 5.56 for the rifles AR-15 / M16 / M4 and other magazines based on the NATO standard ● unique construction enables a quick drawing of the magazine during the so-called combat re-loading ● possibility of setting the desired thrust force of the magazine ● made of extremely resistant plastic ● designated for professional use

Swiveling universal self-locking holder is designated for carrying of absolute majority of metallic or plastic (Magpul, Oberland Arms etc.) magazines 5.56 for the rifles AR-15 / M16 / M4. The sophisticated design with the fixation spring enables a quick drawing of the magazine during the so-called combat re-loading. Each user can himself set the desired thrust force of the magazine with use of 3 spacers supplied with the holder. The holder is made of extremely resistant plastic and it is designated for professional use.

This type of holder is equipped with flat quick-coupling clip which enables rapid insertion of the holder on a belt with one hand only and without necessity of unbuckling the belt. In comparison with fastening clip UBC-01, the distance between the belt and the holder is smaller with this type of clip. The holder can be rotated in respect to the belt by full circle of 360 degrees with 16 locking positions. It can be fastened also to a MOLLE MIL STD webbing.