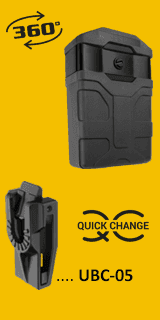 equipped with UBC-05 fixation clip ● can be rotated in respect to the belt by full circle of 360 degrees ● self-locking design with the fixation spring ● designated for carrying of absolute majority of magazines 5.56 for the rifles AR-15 / M16 / M4 and other magazines based on the NATO standard ● unique construction enables a quick drawing of the magazine during the so-called combat re-loading ● possibility of setting the desired thrust force of the magazine ● made of extremely resistant plastic ● designated for professional use

Swiveling universal self-locking holder is designated for carrying of absolute majority of metallic or plastic (Magpul, Oberland Arms etc.) magazines 5.56 for the rifles AR-15 / M16 / M4. The sophisticated design with the fixation spring enables a quick drawing of the magazine during the so-called combat re-loading. Each user can himself set the desired thrust force of the magazine with use of 3 spacers supplied with the holder.

The holder is equipped with universal UBC-05 belt clip. This clip enables the user to quickly change between different plastic and nylon ESP holders with rotation mechanism. The clip itself remains fastened to the belt – you only need to click on the holder of choice.

Thanks to this highly flexible system, the user is able to change his or her equipment according to the particular needs at a given moment. A magazine holder can be switched for a flashlight holder or for a baton holder. In case of need – for example when the police officer is busy with administrative work – the holders that are currently not necessary can be put away completely.

The belt is pulled through the opening in the body of the clip. The holder is then slid onto the clip and secured with locking mechanism. The clip can be adjusted to belt width from 32 mm to 60 mm with the use of an adjustable stop with two bolts. The holder can be rotated in respect to the belt by full circle of 360 degrees with 16 locking positions.

The holder is made of extremely resistant plastic and it is designated for professional use. Color: black.